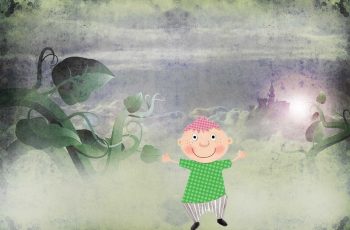 Once upon a time there was a poor widow a young boy called Jack who was brave and quick-witted. He lived with his mother in a small cottage and their most valuable possession was their cow, Milky-White. But the day came when Milky-White gave them no milk and Jack’s mother said she must be sold.

“Take her to market,” she told Jack, “and mind you get a good price for her.” And Thank You Mother farewell, Goodbye Honey said Jack’s mother

So Jack set out to market leading Milky-White by her halter. After a while he sat down to rest by the side of the road. An strange old man came by and Jack told him where he was going.

“Don’t bother to go to the market,” you too young Jack,

the old man said. “Sell your cow to me. I will pay you well. Look at these five magic beans. Only plant them, and overnight you will find you have the finest bean plants in all the world. You’ll be better off with these beans than with an old cow or money You’re The Remarkable Jack? Asked The old man . Now, how many magic beans is five,

“Two in each hand and one in your mouth,” replied Jack, as sharp as a needle.

After the Strange Old Man gave magic beans told is Jack Return Home And when he reached home, his mother said, “Back so soon, Jack? Did you get a good price for Milky-White?”

Jack told her how he had exchanged the cow for five beans and before he could finish his account, his mother started to shout and box his ears. Now look what you’ve Done said Jack’s mother “You lazy good-for-nothing boy!” she screamed, “How could you hand over our cow for five old color beans? What will we live on now? We shall starve to death, you stupid boy.” I’m very Sorry Mother said Jack Now Remember You Jack said Jack’s mother Don’t even think about it Boy?

When Jack woke the next morning there was a strange green light in his room. All he could see from, the window was green leaves. A huge beanstalk had shot up overnight. It grew higher than he could see. Quickly Jack got dressed and stepped out of the window right onto the beanstalk and started to climb.

“The old man said now remember Jack if you plant the beans would grow overnight,” he thought. “They must indeed be very special beans.”

Higher and higher Jack climbed until at last he reached the top and found himselfon a strange road. Jack followed it until he came to a great castle where he could smell the most delicious breakfast. Jack was hungry. It had been a long climb and he had had nothing to eat since midday the day before. Just as he reached the door of the castle he nearly tripped over the feet of an enormous woman.

“Here, boy,” she called. “What are you doing? Don’t you know my husband likes to eat boys for breakfast? It’s lucky I have already fried up some bacon and mushrooms for him today, or I’d pop you in the frying pan. He can eat you tomorrow, though.”

“Oh, please don’t let him eat me,” pleaded Jack. “I only came to ask you for a bite to eat. It smells so delicious.”

Now the giant’s wife had a kind heart and did not really enjoy cooking boys for breakfast, so she gave Jack a bacon sandwich. He was still eating it when the ground began to shake with heavy footsteps, and a loud voice boomed: “Fee, Fi, Fo, Fum.”

“Quick, hide!” cried the giant’s wife and she pushed Jack into the oven. “After breakfast, he’ll fall asleep,” she whispered. “That is when you must creep away.” She left the oven door open a crack so that jack could see into the room. Again the terrible rumbling voice came:

I smell the blood of an Englishman,

Be he alive or be he dead,

I’ll grind his bones to make my bread.”

A huge giant came into the room. “Boys, boys, I smell boys,” he shouted. “Wife, have I got a boy for breakfast today?”

“No, dear,” she said soothingly. “You have got bacon and mushrooms. You must still be smelling the boy you ate last week.” The giant sniffed the air suspiciously but at last sat down. He wolfed his breakfast of bacon and mushrooms, drank a great bucketful of steaming tea and crunched up a massive slice of toast. Then he fetched a couple of bags of gold from a cupboard and started counting gold coins. Before long he dropped off to sleep.

Quietly Jack crept out of the oven.

Jack and his mother used the bag of gold coins to buy food. But the day came when the money ran out, and Jack decided to climb the beanstalk again.

It was all the same as before, the long climb, the road to the castle, the smell of breakfast and the giant’s wife. But she was not so friendly this time.

“Aren’t you the boy who was here before,” she asked, “on the day that some gold was stolen from under my husband’s nose?”

But Jack convinced her she was wrong and in time her heart softened again and she gave him some breakfast. Once more as:ack was eating the ground shuddered and the great voice boomed: “Tee, Fi, Fo, Fum.” Quickly, ackjumped into the oven.

As he entered, the giant bellowed:

I smell the blood of cm Englishman,

Be he alive or be he dead,

I’ll grind his bones to make my bread.”

The giant’s wife put a plate of sizzling sausages before him, telling him he must be mistaken. After breakfast the giant fetched a goose from a back room. Every time he said “Lay!” the hen laid an egg of solid gold.

“I must steal that goose, if I can,” thought Jack, and he waited until the giant fell asleep. Then he slipped out of the oven, snotched up the and rim for the top of the beanstalk. Keeping the hen under one arm, he scrambled Jack and the Beanstalk clown as fast as he could until he reached the bottom. Jack’s mother was waiting but she was not pleased when she saw the goose.

“Another of your silly ideas, is it, bringing an old hen when you might have brought us some gold? I don’t know, what is to be done with you?”

Then jack set the goose down carefully, and cornmanded “Lay!” just as the giant had done. To his mother’s surprise the goose laid an egg of solid gold.

Jack and his mother now lived in great luxury. But in time Jack became a little bored and decided to climb the beanstalk again.

This time he did not risk talking to the giant’s wife in case she recognized him. He slipped into the kitchen when she was not looking, and hid himself in the log basket. He watched the giant’s wife prepare breakfast and then he heard the giant’s roar:

I smell the blood of an Englishman,

“If it’s that cheeky boy who stole your bag of gold and our magic goose, then help you catch him,” said the giant’s wife. “Why don’t we look in the oven? It’s my guess he’ll be hiding there.”

You may be sure that jack was glad he was not in the oven. The giant and his wife hunted high and low but never thought to look in the log basket. At last they gave up and the giant sat down to breakfast.

After he had eaten, the giant fetched a harp. When he commanded “Play!” the harp played the most beautiful music. Soon the giant fell asleep, and jack crept out of the log basket. Quickly he snatched up the harp and ran. But the harp called out loudly, “Master, save me! Save me!” and the giant woke. With a roar of rage he chased after Jack.

Jack raced down the road towards the beanstalk with the giant’s footsteps thundering behind him. When he reached the top of the beanstalk he threw down the harp and started to slither down after it.

The giant followed, and now the whole beanstalk shook and shuddered with his weight, and Jack feared for his life. At last he reached the ground, and seizing an axe he chopped at the beanstalk with all his might. Snap!

“Look out, mother!” he called as the giant came tumbling clown, head first. He lay down at their feet with the beanstalk on the ground beside them. And That was the end of the Giant And The Magical harp, but the goose continued to lay golden eggs for Jack and his mother became very rich, and he married a great princess, and they lived very very happily ever after and in great comfort for a long, long time.

Classic story of pirates and adventure.

The strange and wonderful adventures of Alice down the Rabbit hole.